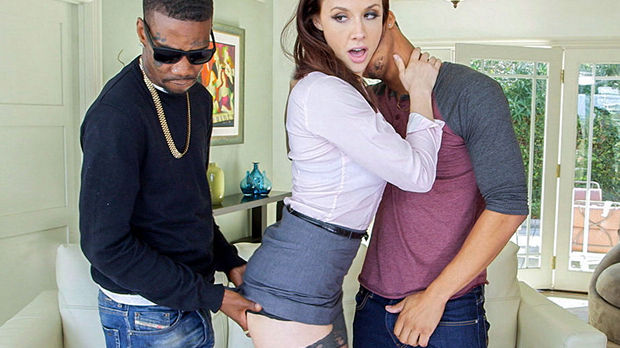 By first appearances, the stunning Milfs on BlacksOnMoms.com come across as classy, glamorous, and quite gracious. They dress smartly and very expensively and carry themselves with a lot of dignity in public. Woe unto you if you fall for their wolf-in-a-sheep's-skin charade. These are the most decadent mom's ever and they won't hesitate to seduce and lure you into any semi-private place for a quick romp. But you don't have to worry if you're white; these ravenous cougars hunt for dark-skinned dongs exclusively. Unfortunately for them, they got a very small meal on this site. The site was launched just last year but it then stopped updating back in February this year — and by then they had posted only 20 clips. Seriously, these guys are starving these black-cock predators. It's like giving candy to a kid and then grabbing it from his mouth the moment he tastes its flavor. That is absolutely cruel.

These broads performed in some very sensational interracial scenes and you can watch all of them in crystal-clear Full HD using this Blacks On Moms discount. They're available for streaming on an embedded Flash player but you can also save them in multiple formats including MP4, MPG, and Windows Media files. And speaking of the actual scenes, the site also shortchanged these vixens performance-wise. On the homage, the introductory banner declares that this hub is "your source (of) interracial gang bang videos". They promised the fans and these cock-craving Milfs gangbangs. But there are all threesomes and only one foursome. Only one lucky lady tasted a tinge of the actual promise. I hope that updates will resume soon and that this time they'll actually be gangbangs with 5 dudes or more. But in all fairness, the posted content is super hot and it features some of the most talented Milfs. There's an unmistakable big boob theme in all the clips and it goes without saying that killer curves are in plenty. The featured dudes were all very impressive with inhumanly long and fat schlongs and they performed intensively without being rough.